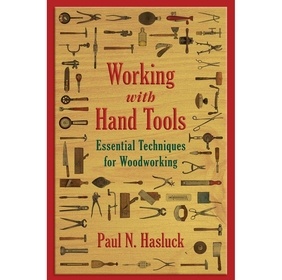 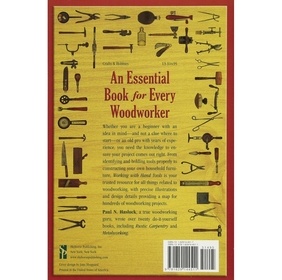 Résumé
The Handyman's book is a pratical work on practical handicraft in wood. and it is published in the conﬁdent belief that it is by far the most exhaustive book on the subject hitherto produced.

The book is intended for all those who would handle tools, and who, by the use of them, wish to furnish the home and to proﬁt their pockets. The treatment adopted throughout is simple and practical, and there has been a consistent endeavour to combine accurate information with clear and deﬁnite instruction, anything that did not further this object having been excluded. The amateur’s restricted requirement have been carefully studied; still the contents make a direct appeal to the professional craftsman in carpentry, joinery, and cabinet work, to whom this book will be invaluable for ready reference, containing as it does a large and varied collection of workmanlike designs for a multitude of articles of use in the homestead, garden, workshop, oﬁce, and home. This book will be found especially useful to colonists and persons in out-of—the-way places, as it teams with practical hints and details that must the of the utmost worth to those whose very existence often depends on their ability to use woodworking tools.

Woodworkers’ tools, materials, and processes are treated of in a manner that is both simple and explicit. The seven chapters on tools are in themselves a comprehensive treatise in which the shape, construction, manipulation, care and maintenance of all approved hand tools used in present-day woodworking are proﬁtably discussed and described and clearly illustrawd. The processes explained include all the more general operations of setting out work, cutting, planing, sawing, boring, jointing, etc., as well as some that are more special in character, such as turning and uncaring, and in every case the process is explained step by step, plain instruction being rendered the more explicit by the lavish use of illustrations.

Mere amateurism and faddishness have been avoided. The tools and processes described are those found in daily use in the workshop. The expert and well-informed reader will, of course, make due allowance for the great variation of trade practice in different localities. Throughout this book actual practice is recorded, and mere discussion of theory has been excluded, except where it is an essential preliminary to understanding the principles underlying a method, a process, or the action of a tool. The examples of construction have been adapted from existing articles, and the columns of Work and Building World, two weekly journals it is my fortune to edit, have been drawn on freely. In most cases the method of doing the work is described by the actual maker, who often is the designer as well; but the matter has been, where thought desirable, re-arranged, altered, and in some cases re-written, in accordance with the general plan of the book and with the endeavour to present the information in the clearest possible manner, and to adopt a simple and consistent style throughout.

Wood is the material chieﬂy used in the construction of the articles described in this book, and the section relating to it exhausts the subject as far as it is of practical interest to the handicraft woodworker. Enough of botany is introduced to make intelligible the process of seasoning; converting is sufﬁciently explained; and, to assist the inexperienced person in judging and selecting wood, the many varieties of commercial timber are plainly described.

The thousand and one examples of woodwork, here treated where necessary in minute detail, are arranged as far as possible so as to form a graded course, ranging in domestic furniture from a simple paste—board to a chiffonier or bedstead, in ofﬁce furniture from a paper rack to a pedestal writing-desk, and in homestead and garden appurtenances from a chicken—run to a greenhouse. Chapters on outdoor rustic carpentry, gates, tough fencing, etc., are also given; and the wide range indicated affords ample scope for a most extensive variety of examples in practical handicraft in wood.

The book contains more than 2,500 illustrations, many of which have been specially photographed by myself. Neither trouble nor expense has been spared in making them really helpful, and an examination of the pages will show their value. Fully two-thirds of their number portray in detail articles that can be made by the
handyman who has systematically pursued the graded course of study set out in this book. Of the remaining illustrations—more than 500 show woodworkers tools and appliances; and in this connection special acknowledgment must be made to Messrs. Marples & Sons, Sheffield; Messrs. Melhuish, Sons & Co., London; Messrs. C. Nurse & Co., London; Messrs. Chas. Churchill & Co., Ltd, London; Mr. H. Hobday, Chatham; Messrs. O’Brien, Thomas & Co., London; and Messrs. Spears & Jackson, Shefﬁeld, for their great help in kindly having lent electrotypes illustrating modern tools of approved design.

The eighteen-page index, containing between 3,000 and 4,000 entries, affords a means by which the readers can easily find any item of information contained in the book.